You never know where an angel may appear. I didn’t know what kind of reception I’d get for my memoir, Jimmy and Me. After publication, I spent a year promoting the book at local events and libraries and attending book club meetings. 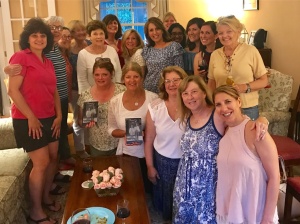 My friend Peggy graciously hosted me at her book club near the town in Pennsylvania where I grew up. The 20 members gave me a warm reception and asked insightful questions.

A couple of months later, one member named Ginny contacted me to say she was an avid Philadelphia Flyers fan just like my dear brother Jimmy who has special needs. She asked for his address and said she wanted to send him hockey swag.

Shortly thereafter, Jimmy opened a box filled with Flyers t-shirts, hats, a signed puck, a variety of other goodies, and a personal note from Ginny. He called me to share his excitement and expressed a sense of wonder that someone he’s never met sent gifts related to his beloved Flyers.

I’m still in awe of the kindness of someone who came to know Jimmy only by reading about him. Never did I imagine my words would impact a reader who’d feel an urge to do something to bring my brother joy in his mid-60s.

Ginny’s selfless act reminds me why writing the book was worthwhile and it far surpasses any public recognition I could receive.

4 thoughts on “An Angel Named Ginny”